Research area and state of the art 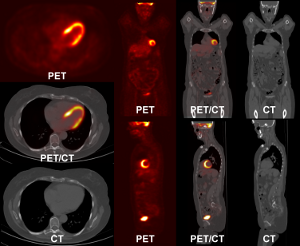 Figure 1: PET-CT scan of the heart.

The core principle in nuclear medicine is to administrate a radioactive substance (also called tracer) to patients. It is absorbed by tissue in proportion to some physiological process, e.g. the growth of tumour cells. The reconstruction allows the recovery of the three-dimensional (3D) distribution of the tracer through the body (see Figure 1). There are two kinds of tomographic modality in nuclear medicine: 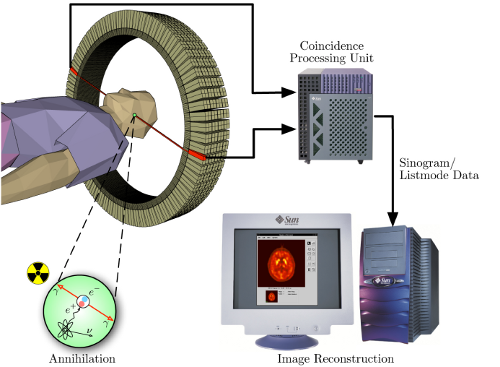 Figure 2 illustrate the PET acquisition process. After interactions, a positron combines with an electron. It generally produces two photons of 511 keV emitted in opposite directions. They are detected in ‘coincidence’ (i.e. almost at the same time). The line between the detectors that have been activated for a given pair of photons is called line of response (LOR).

An overview of reconstruction methods in nuclear medicine can be found in [1]. They are often divided into two classes:

The maximum-likelihood expectation-maximisation [4] and ordered subset expectation-maximisation [5] are the most widely used techniques PET. They are iterative methods. ML-EM assumes Poisson noise is present in the measured data. It does not produce the artefacts seen in classic FBP reconstructions, and it has a better signal-to-noise ratio in region of low concentration. However, the algorithm is known to converge rather slowly. OS-EM has been proposed to speed-up convergence of the EM algorithm and it has become the reference reconstruction method. Its principle is to reduce the amount of projections used at each iteration of the EM algorithm by subdividing the projections in K sub-groups. The projections of a sub-group are uniformly distributed around the volume to reconstruct.

ML-EM and its derivative, OS-EM are gold standard reconstruction techniques in nuclear medicine. These reference reconstruction methods, however, suffer from factors that limit the quantitative analysis of their results, hence limit their exploitation during the treatment planning process and during treatment monitoring.

Prior to the reconstruction, the LOR data is often rebinned into a sinogram [6,7]. This intermediate data representation corresponds to projection data that can be used by conventional tomographic reconstruction codes. A broad overview of reconstruction methods using projection data in nuclear medicine can be found in [7,8]. Using sinograms in PET introduces drawbacks (such as sampling, difficulties to take advantages of physics and geometrical properties of the imaging system, etc.) and, therefore, a new approach dedicated to PET is required to directly use the list-mode data. Other limiting factors include the use of noisy, large and complex datasets, complex physical phenomena (such as Compton scattering and gamma attenuation for example), and the movement of patients (including the motion of internal structures due to respiration). It is possible to take them into account to attenuate the artefacts that they generate in reconstructed images, e.g. by ‘cleaning’ sinograms or writing dedicated correction algorithms for list-mode data, and this has been an active field of research for quite some time. However, these technologies are not readily available in the clinic, mainly because of the heavy computational power that they require and/or the difficulty of modelling all these corrections in standard algorithms.

Image reconstruction in tomography is an inverse problem that is ill-posed: a solution does not necessarily exist (e.g. in extreme cases of excessive noise), and the solution may not be unique. This problem can be solved as an optimisation problem, and on such cases, evolutionary algorithms (EAs) have been proven efficient in general, and in particular in medical imaging [9,10,11]. An EA is a stochastic optimisation tool that relies on Darwin’s principles to mimic complex natural behaviours [12]. In particular, it makes use of ‘genetic operators’ based on the biological mechanisms of natural evolution (e.g. reproduction, mutation, recombination, and selection). The candidate solutions to the problem to be solved by optimisation are called ‘individuals’. Individuals are grouped into a population. The population evolves using the repeated application of the genetic operators. The adequacy of an individual ‘to live’ in its environment is measured using a ‘fitness function’ (also called ‘cost function’). After convergence, the ‘best’ individual is extracted. It corresponds to the solution of the optimisation problem.

Preliminary work made use of a cooperative co-evolution scheme (or ‘Parisian approach’) called ‘Fly algorithm’ [13]. A Parisian EA (see Figure 4) usually contains all the usual components of an EA, plus the following additional ingredients: 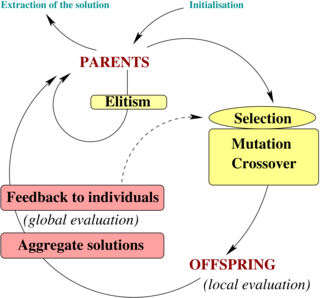 Contrary to traditional EAs, the Fly algorithm embeds the searched solution within the whole population, letting each individual be only a part of the solution.

This scheme as been shown promissing in SPECT. In this case, an individual, i.e. a fly, is considered as a photon emitter and artificial evolution optimises the location of photon emitters [14].

For PET reconstruction a fly is a 3D point that emits annihilations. Using a cooperative co-evolution scheme to optimise the position of annihilation sites, the population of flies evolves so that the data estimated from flies matches measured data. The final population approximates the radioactivity concentration (see Figure 5 for examples). This approach showed promising results in relatively simple test cases in fully-3D LOR space [15,16,17,18,19]. However, the test data did not take into account physical phenomena such as the mean free path of positrons, the non-collinarity of annihilation photons, the γ-ray attenuation, and the Compton scattering.